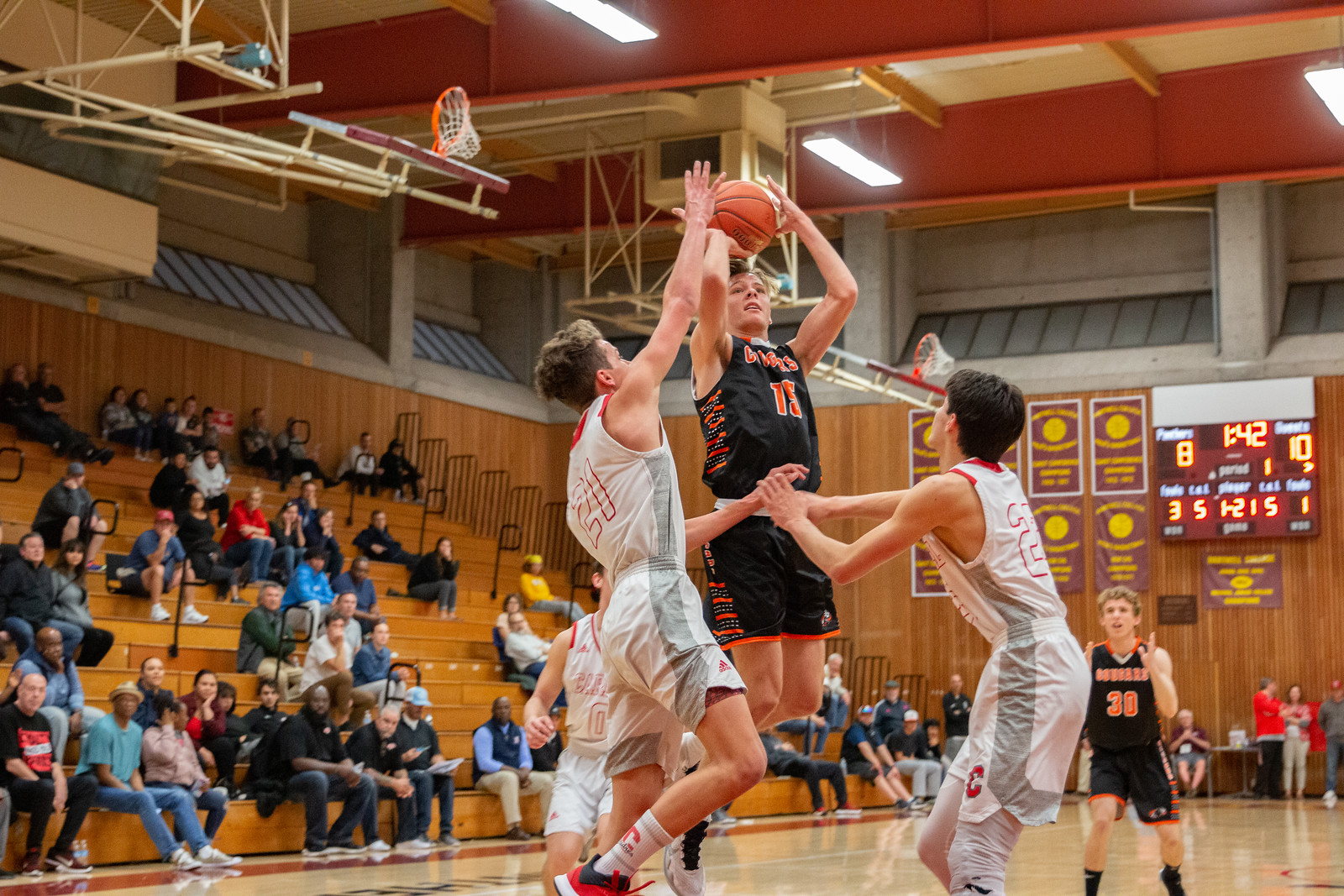 Thursday night in Salinas, the HMB Boys lost a hard-fought semifinal game in the CCS championships to the Carmel Padres 56-52. With the conference championship in view, the Cougars couldn’t quite get past Carmel’s talented bigs and second half dose of solid guard play. Though done in pursuit of a CCS title, HMB (20-6, 12-0) benefits from a strong non-conference schedule and the stout Div IV CCS competition and will get an at large bid to the CIF NorCal tournament starting Tuesday night – Division, opponent and location TBD.

HMB started strong holding Carmel to 10 first quarter points while bolting to an early lead on the strength of 3 of 5 treys, two from Lukas Meighen (8 points, 4 rebounds) and another from Sean Kennedy. Meanwhile Mykola Ediger (15 points, and 4 each of assists, rebounds, and steals) was a driving force making 3 attempts in a row to push the advantage to 13-8. Kennedy was key off the bench, scoring in each quarter and provided vital secondary threes and fast break layups to tally 13 for the game. At the zenith of the Cougar first half run, Mike Hourani took an assist off a steal from Owen Wooliever to push the lead to 10, and Kennedy buried a 3 to end the first leading 21-10.

The Cougars led by as much as 12 early in the second quarter but in a back and forth sequence with too many turnovers and not enough good looks, let the Padres back in the game and ended the half up by two 29-27. That swing was especially inopportune as JT Byrne, Carmel’s leading scorer sat good portions of the second quarter with foul trouble after getting T’ed up for a little tantrum midway through the 1st quarter. Meanwhile, Carmel’s Kai Lee hit three buckets in a row including two 3-pointers.

Lee made another 3 out of the half before Zeke Syme (3 points, 3 rebounds) made 2 free throws and Mykola scored on a driving floater to retake the lead 35-34. Mykola made two tough 3rd quarter shots, Kennedy had a clutch 3 from the right side and Wooliever grabbed an offensive rebound and put back to take the Cougars’ last lead at 42-39. Carmel would assert its size on both sides of the court the rest of the way foiling HMB drives and Byrne getting feeds on designed plays to convert short inside shots. Ben McKnight (7 points and 4 assists) took a late assist from Mykola for a layup and then rattled home a 3 with 4:54 left, and Sean Ediger had a backcourt steal and fastbreak layup to pull close. But the Cougars, game until the end, couldn’t get good enough looks or consistent stops to pull it out against a closely matched Carmel squad.